So I've really been focusing on my Super Powers Collection lately. Like I said before, for a while I was picking up items from other lines. I have since gotten back to my favorite toy line and have made some great scores.

Batman and Superman are my two favorite characters from this line. I have been working on picking up all the variants and rarities for these two characters. My Batman focus is a bit further along then my Superman. Either way I added some cool variants to both collections this week. 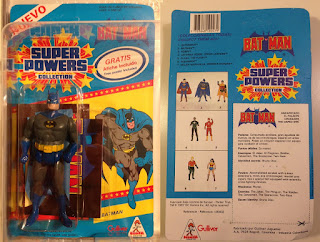 This Batman is made by Gulliver Juguetes (Toys) from Brazil. This is a super special variant in my opinion. I feel this way because it is truly different. The card is much smaller then a Kenner card. The figure itself does not have articulated knees and has a vinyl cape in place of the typical clothe. The colors on batman are much darker when compared with the Kenner Super Powers version..... 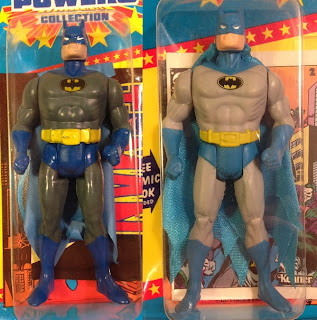 Gulliver                       Kenner
The Gulliver figure also came with a poster. Kenner figures included a comic until series 3. Needless to say I am totally psyched to have this figure in my collection. It's pretty rare and it's Batman! 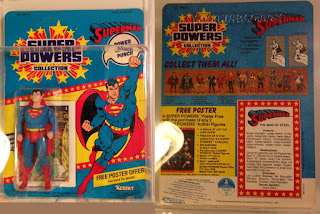 This Superman looks just like a US version to the normal collector =) To us Super Powers nuts we can spot the subtle difference. This Superman was sold in the UK. In order for the kiddies over there to get in on the Fan Club offered poster, the Palitoy company slapped a sticker on the back so kids knew how to order theirs...

This is not as cool a variation as the Gulliver Bats, but definitely essential in completing a full run of Superman in my opinion. I have a Batman UK Palitoy as well that can be seen here 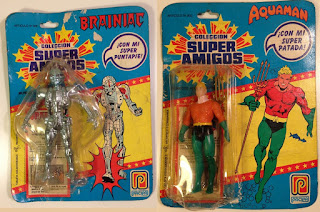 These figures were made in South America as well. Argentina this time. Like many other Super Powers collectors, I enjoy adding foreign variations to my collection. I've been on a bit of a role lately and have added a bunch in 2013. I particularly like the Brainiac as he is one of only two figures that have a uniquely shaped bubble (Hawkman being the other or Hombre Halcon). These are not in the greatest shape, but when it comes to foreign and rare items I'm less picky. If you'd like to see some of my other recent foreign acquisitions check out this page. 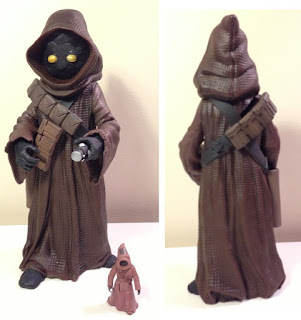 90s era Jawa was happy to help show the scale.

I was at my local collectible shop yesterday checking out his new stuff and spotted this guy. For as big and detailed as it was (and for only 10 bucks!) I had to have it for the Nerd Nook! 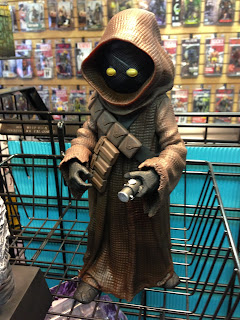 Here he is among his fellow toys.

So that's it for another Newbie update. I'm way excited with the progress my foreign collection has made so far in 2013!