This weeks assignment is another vague one "The Oscars". These are some of my favorite types! The ideas coming from other League blogs have been really great! I'm going to go with.....

To Kill a Mockingbird By. Elmer Bernstein (Nominated)
There's just something about this that seems to capture that magical feel of being a kid. Scout, Jem, and Dill engage in some of my favorite childhood activities throughout the course of this book/movie. It's an excellent story that unfolds from the perspective of innocent children. One of the great ones!

Jaws By. John Williams (Won)
This one doesn't really need an explanation.  I remember watching this as a kid while on vacation at the Jersey Shore (long before those no talent ass clowns ruined its perception!).  Seemed like a great place to be watching it.
"You're gonna need a bigger boat"
Heaven Can Wait - Dave Grusin (Nominated)
This one brings back lots of great memories, and is also very fitting if you've ever seen this movie.
"don't show me anymore hats!" - A personal favorite quote when I feel overwhelmed!

Superman by John Williams (Nominated)
John Williams has defined many heroes (and villains for that matter) with his uncanny ability to epitomize the very essence of the character.
"I'm here to fight for truth, justice, and the American way"

The Empire Strikes Back By John Williams (Nominated)
There are few themes with as much raw emotion as this one. Especially when you consider what has happened in the movie while this theme is playing (I don't think I need the embellish here) Simply epic!
"Obi Wan never told you what happened to your father!"

Raiders of the Lost Ark By John Williams
If AWESOME had a name it must be.....JOHN WILLIAMS!
This theme basically IS Indiana Jones.
"bad dates..."

E.T. the Extra Terrestrial by John Williams (Won)
This theme could be the soundtrack to my childhood. It is my all time favorite. I don't think I've ever watched this movie and not gotten chills when the bikes take off to the bewilderment of the adults present. Timeless.
"I'll...be...right...here"

The Untouchables - Ennio Marricone (Nominated)
Another one of my all time favorite themes. Really captured the feel of this movie and the "crusading cops".
"Word is they're going to repeal prohibition. What'll you do then?"
"I think I'll have a drink"
Great scene and ending to this awesome movie

Forrest Gump By Alan Silvestri (Nominated)
"Luitenant Dan said "we didn't have to worry about money no more". I said "good, one less thing!"

Gladiator - Hans Zimmer (nominated)
This movie came out the summer I graduated high school. Great memories attached to this one. I took a trip to Italy with my class two weeks after seeing this. Awesome. 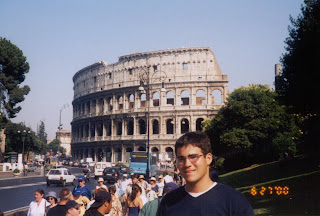 "what we do in life, echoes in eternity"

So that's it for my painfully nostalgic ramblings! I could probably add another dozen to this list but I'm gonna cut it there. I'm sure I'm not alone in my love of themes. It's nuts how a song can transplant us instantly to a time long past. I think that's what I love most about these themes. That's why they were chosen for this list.

Check out these other awesome takes on this week's assignment:
AEIOU and Sometimes Why has "THE Oscars"
Top Hat Sasquatch has Oscar Winner Action figures
shezcrafi has some great 80s Best Original Songs

For the rest of the League's Oscar assignments check out Cool and Collected
Posted by Rich at 7:00 PM