As far as birthdays go this would be one of epic proportions. John Williams set the mood in many of my favorite movies of all time!

Including the drama filled ending of "Empire Strikes Back"' , the Jones's, Marcus, and Salah riding off into the sunset in the final scene of "Last Crusade"! For providing the feeling of magic and wonder as the bmx bikes take flight to the bewilderment of the adults who see! John Willaims has done it all!

With a few simple sounds he struck terror in the hearts of movie goers and swimmers alike, defined an Empire with an epic and commanding sound. Captured the sheer size and importance of all that was Jurassic Park! And less we forget encompassed all that was "Superman" with a theme that conveyed sheer greatness!

Yes John Willaims is a living legend. His contributions to entertainment and pop culture are surpassed by none!

Happy 81st Mr. Williams! I hope you have 81 more.....the world, more importantly, the entertainmentbusiness as a whole would not be complete without you! 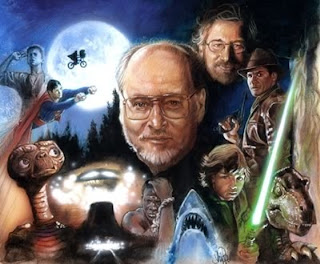