LOEB - My Life in One Square Foot

This week for the League of Extraordinary Bloggers we'll be snapping a photo of one square foot. The catch is we'll need to fill that one square foot with items that sum up our lives. I decided a fun way to approach this topic would be my life as a lover of pop culture in one square foot. Here goes.... 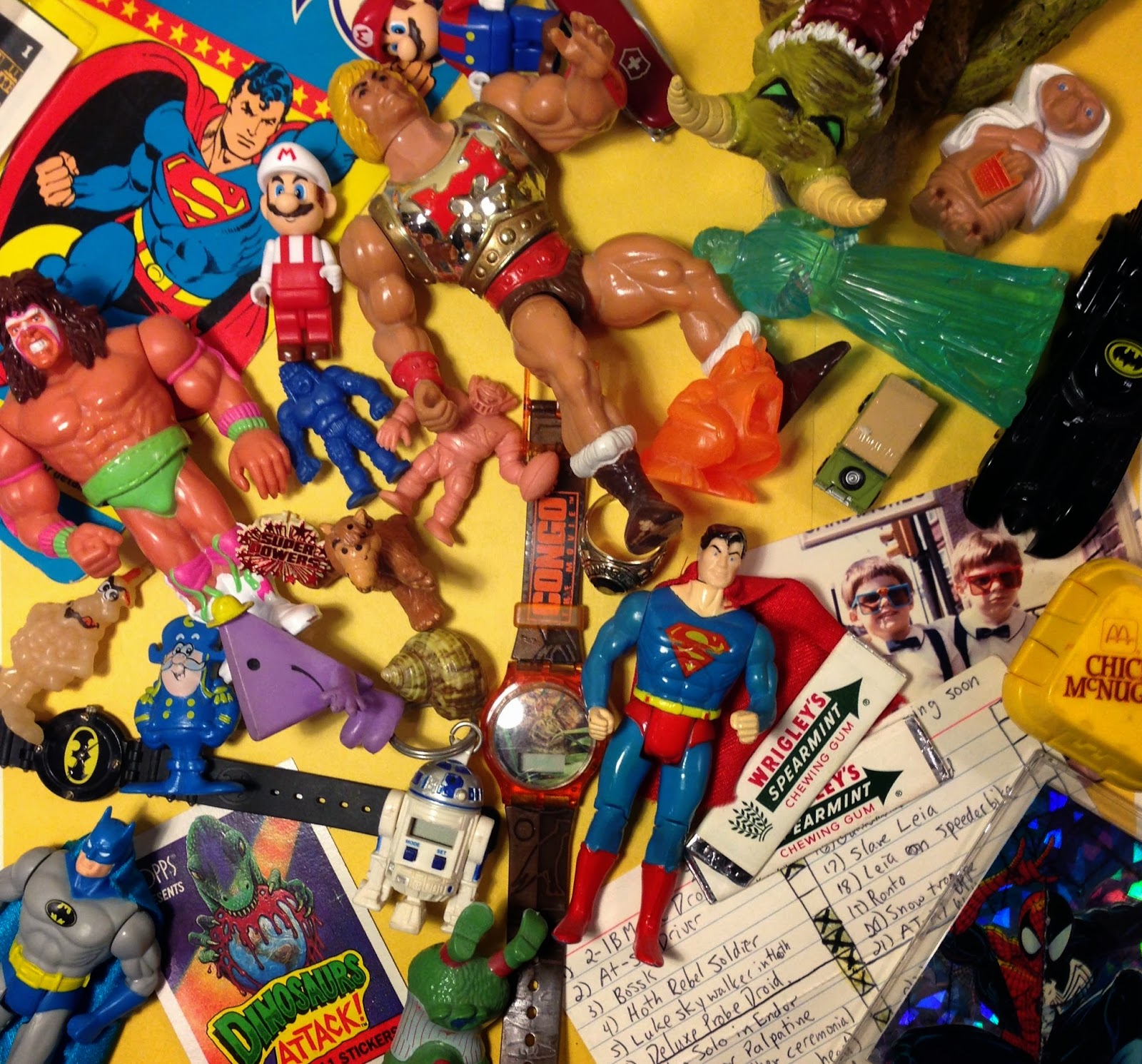 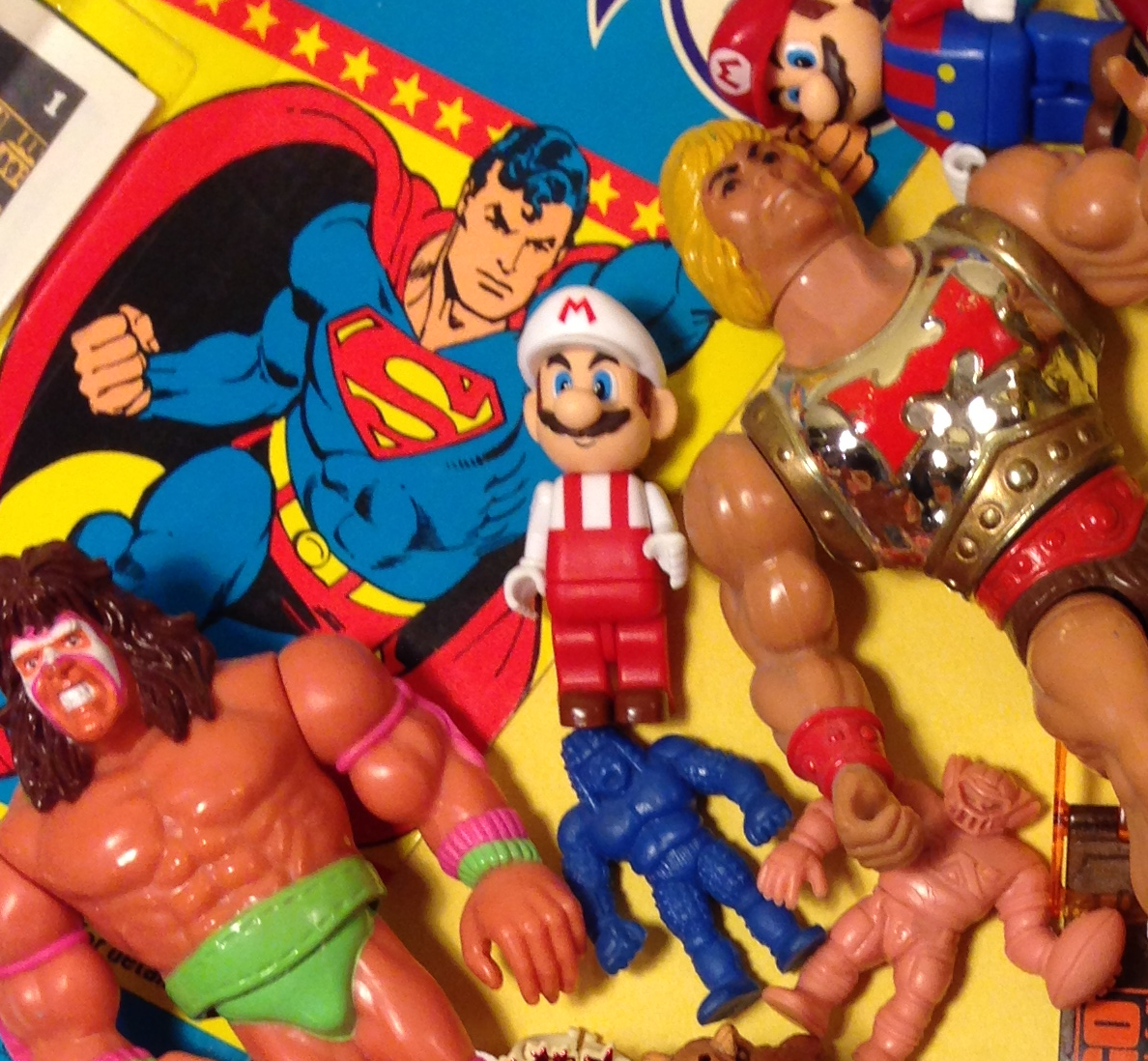 Literally the first thing I popped into my frame was the MOC Super Powers Superman and my Flying Fist He-Man from childhood. Super Powers and MOTU are the first action figures I remember playing with. You could say it's where it all started. Also in this photo are two variations of Super Mario. I don't think many 80s kids can think back to their childhood and not recall fond memories with everyone's favorite plumber! I also threw in some Muscle Men. I had loads of them. Simple yet fun! Finally I popped in my Ultimate Warrior action figures (Thanks Brian!). For a few years my brother and I went through what I like to call our wrestling phase. We were obsessed and the Warrior was my favorite! 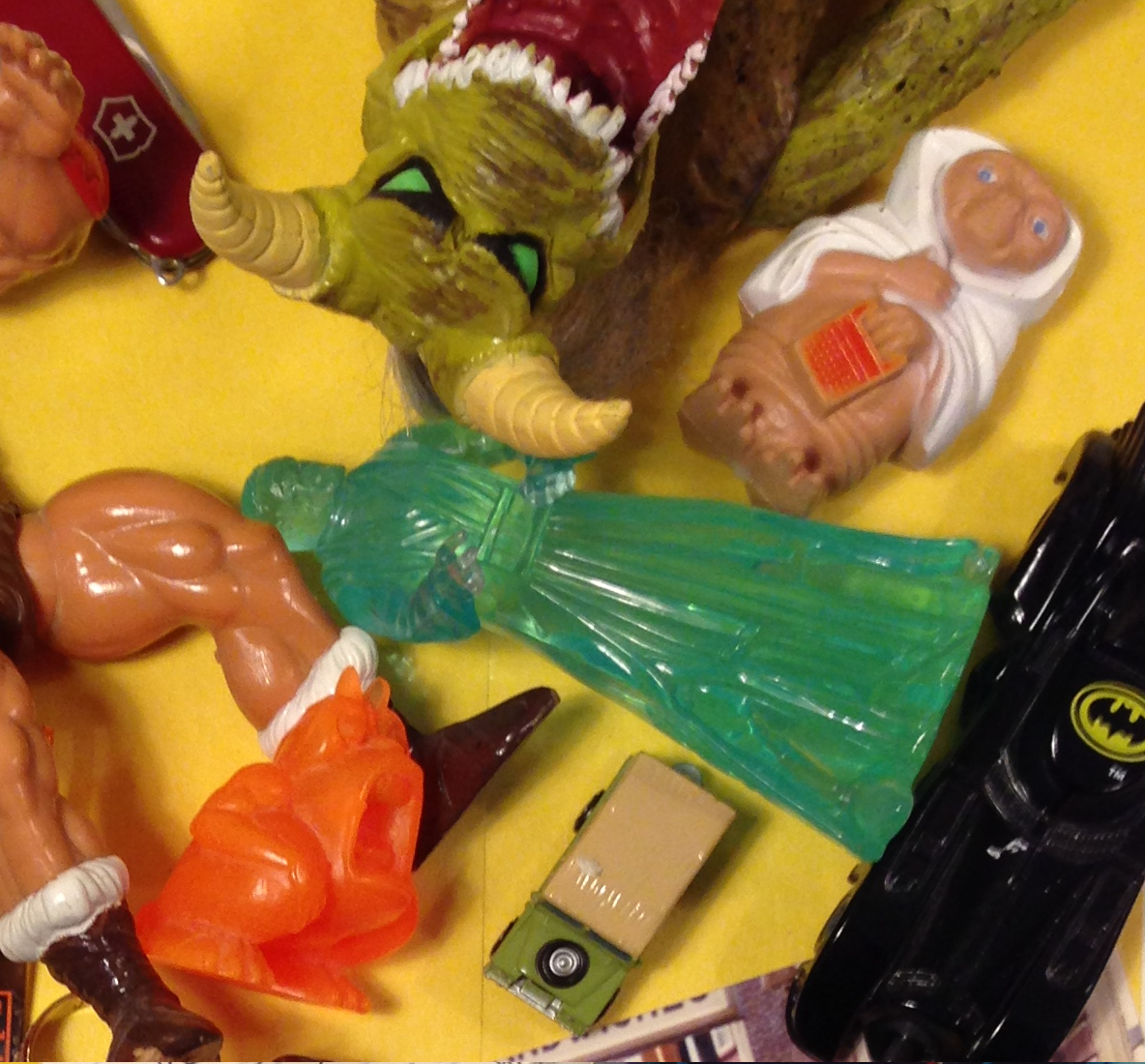 In this shot I've got some more vital pieces of my childhood. My first pocket knife (I thought I was Indy himself with that thing), Malebolgia from the 90s Spawn toy line (I had quite a collection of those but never had this guy!), a pvc E.T. (my favorite movie of all time), Ghost of Obi Wan (my love of Star Wars began in the 90s and I had loads of those figures), 1989 Batmobile (all time favorite Super Hero flick), a Micro Machice (cause they were pretty much awesome), and a ghost from the Real Ghostbusters! 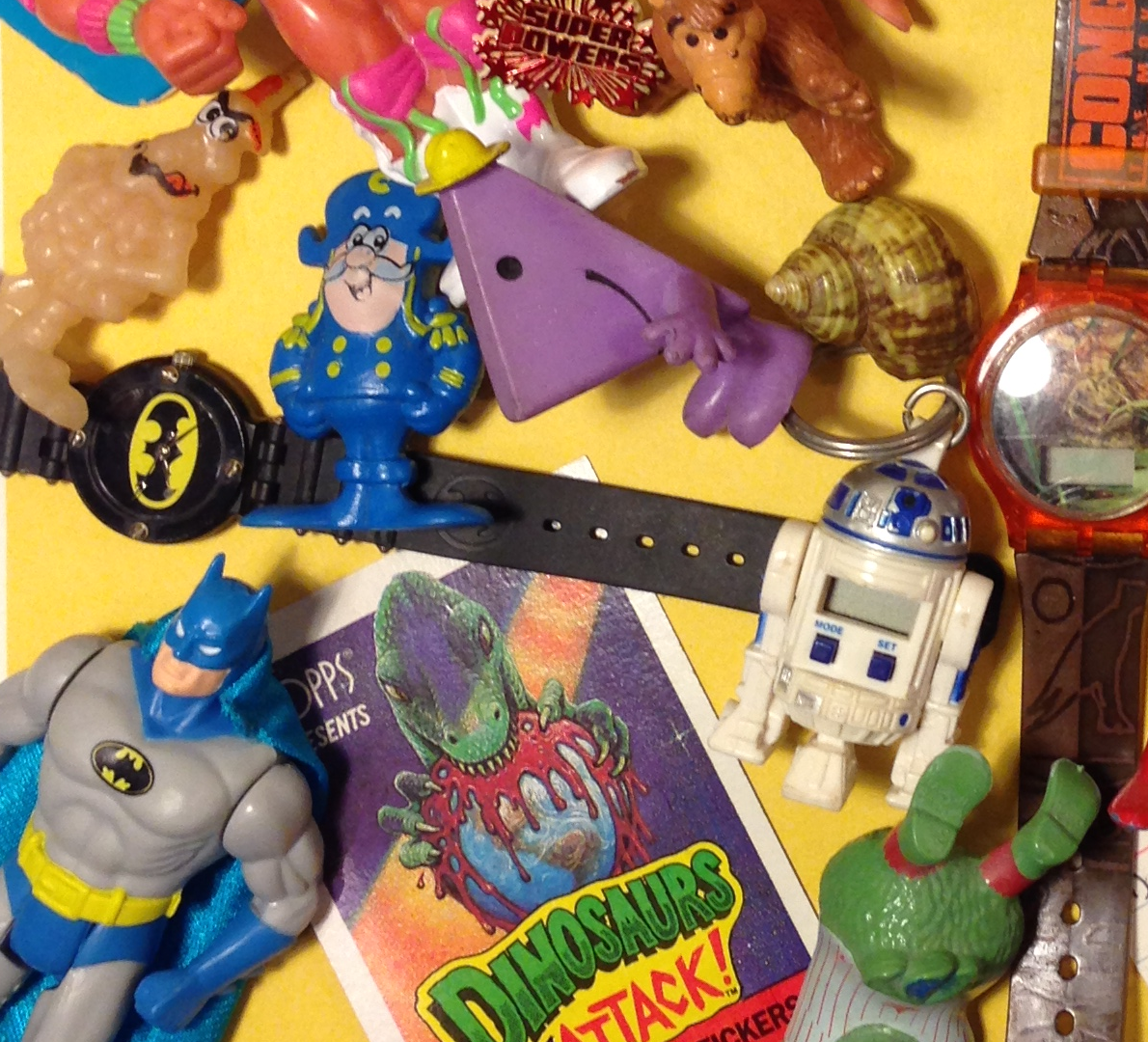 Moving right along I've got a Super Powers Batman (cause he's Batman), a Dinosaurs Attack Card (we could handle the violence), my Batman watch from 1989 (that symbol was everywhere!), some Cap N Crunch cereal premiums, a super rad Super Powers ring, a pvc Alf, my R2D2 clock key chain that I had on my school bag in grade school, a Congo Taco Bell giveaway watch (there was a Taco Bell next door to the movie theatre), and my first pet Buddy's shell (he was a hermit crab) 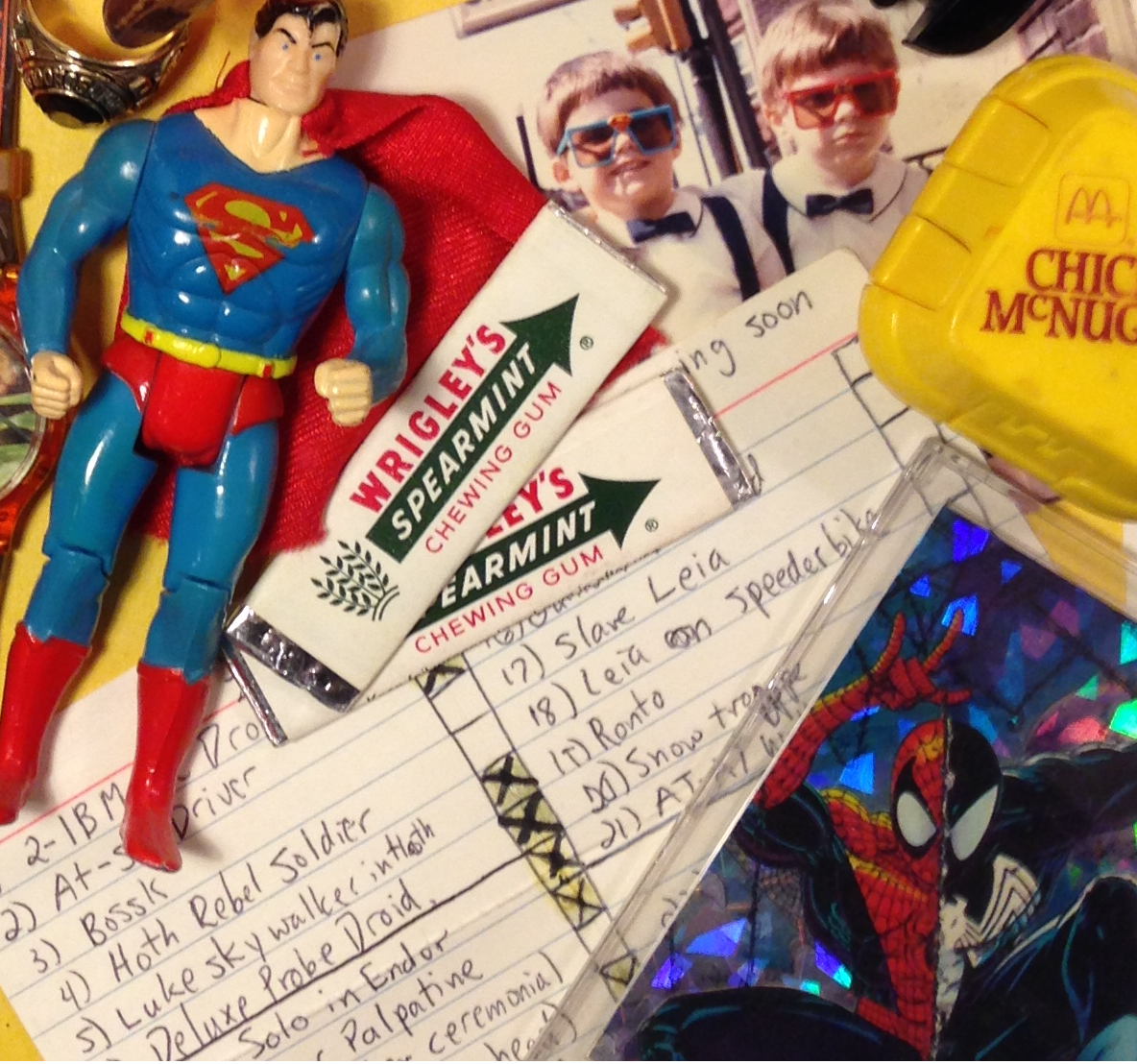 Finally I have my high school class ring, my 1989 Toy Biz Superman (I loved that toy!), a photo of me and my bro decked out in Nasta Super Powers shades, a check list I made for the new Star Wars figures coming out in the 90s (I love that this somehow survived), a transforming box of chicken nuggets, 2 sticks of gum from about 25 years ago (sentimental value), and a foil card from a set of Spiderman cards I collected (I loved comic cards!). I probably could have jammed more stuff into this photo but I tried to stick to the stuff I remember the best and enjoyed the most! It's true, I'm a life long lover of pop culture with no signs of stopping!


Hope you enjoyed my photo and be sure to scope out Cool and Collected for the rest of this week's post. They are sure to be worth the look!
Posted by Rich at 4:16 PM