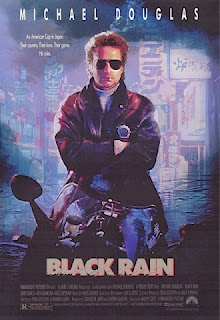 The 80s was a decade rich with cop movies. There was "Lethal Weapon", "Beverly Hills Cop", "48 Hours", "Robocop", "Police Academy" (for the lols), "Running Scared" (childhood favorite), "The Untouchables" (epic soundtrack), "Die Hard", "Red Heat", "Tango and Cash", "Turner and Hootch", and the list goes on. With all those great and memorable movies mentioned, there's one that rises to the top for me, "Black Rain". 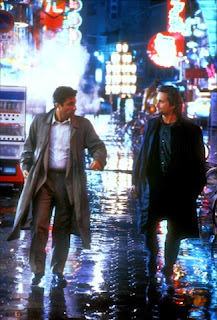 This movie had an amazing cast and the settings in Japan were perfect. The score by Hans Zimmer as well as "I'll Be Holding On" by Greg Allman were perfect compliments to this great cop flick.

The movie begins with Nick (Michael Douglas' character), a motorcycle racing for cash New York cop embroiled in an internal affairs investigation into his on the job ethics. His partner Charlie (Andy Garcia) is a young, hip (for the 80s), hot shot cop loaded with enthusiasm. They make for a great pair!

While Nick is dealing with the heat of the investigation, he and Charlie by chance witness a Japenese mob style hit in a restaurant in New York. They are able to chase down and apprehend a high ranking member of the Japanese mob, Sato. Sato is wanted in Japan for an assortment of offenses and is to be sent back to Japan. Nick and Charlie are to personally deliver him and that's when things go south....fast! They are duped before they even get off the plane by Sato's men impersonating police. Needless to say Nick is not the type of cop that takes kindly to being screwed with. They delve head first into a counterfeiting war more complex than they could have ever predicted.

It's truly a masterpiece of a movie with some great quotes from Michael Douglas that if I included would lose me my PG rating fast! The performance by the cast is outstanding. If you haven't seen this movie put at the top of your to do list!
Posted by Rich at 7:53 AM