The League Has Spoken - Spies!

It's Monday and time for the first League assignment of 2013. "Spies".  I will approach this assignment from a vintage toy/spy movie point of view! I always go with whatever pops in my head when I first see the assignment. These two things were 1 and 2.

What kid didn't want to be a spy! Back in the early 90s they started coming out with these toys called "Spy Tech". They had all types of gadgets you could use to spy on people, record people, decode and encrypt stuff. You name it! Me and my friends had a ball playing with this stuff. I personally never had any of my own spy tech goodies. Quick story I wanted the spy tech my big brother wanted Tazmanian Devil for SNES. TAZ won that battle. Luckily a good friend had loads of this spy gear!

These glasses were in his "Attache" case. The far left and right sides of the lenses had mirrors on them to see behind you! 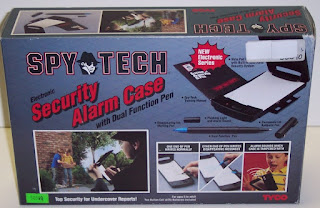 He had this and many other goodies.
We had hours of fun lurking about imagining our neighbors were Spies themselves putting together elaborate schemes to stop them. Ah those were the days.  We all, of course had "code" names, mine was "Condor". 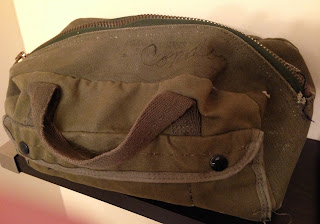 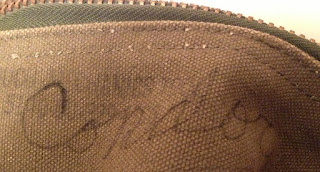 Like I said I didn't have an official spy tech gear, but my Uncle Ants(Anthony) gave me this cool old bag that I used when I was deep under cover! This is another "priceless" item to me.

Goldfinger
Like I said, a double approach to this blog. I covered the toys and fun aspect of "Spies" now onto a movie that defined an entire genre for me.....Goldfinger! My Grandmom, Uncle Charlie, brother, and I would make occasional trips to K-Mart in the late 80s.  I was never one for shopping but we would go along in the hopes of getting a Matchbox car or some other goodie. Plus we always stopped for donuts after. Grandmom would often buy VHS movies and we'd go home that night and watch them. This is how I came to see some of the movies that have had a huge impact on my life as a lover of pop culture. Well goldfinger was one of those movies. I mean come on Oddjob, naked ladies covered in gold paint, the iconic line "NOOOO Mr. Bond, I expect you to die!!!!".  Anyway great movie, great memories, great league assignment. 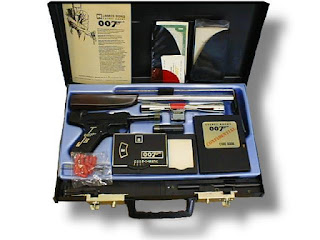 James Bond's attache case! This thing is way before my time and I only know about it through watching "Toy Hunter" but man would I have killed to have this thing during my stint as an international spy.

Check out these other League member's top secret assignments
Infinite Hollywood is showcasing a Captain Action Custom Spy
"That Figures" is showing off some awesome old school board games
Rediscover the 80s is hitting close to my heart with an NES game!
AEIOU and Sometimes Why is taking us back with some old school spy flicks
For the rest of the League's classified information report here