The League Has Spoken - Cowboys!

As the title implies this league assignment is all things Cowboys!

I gotta admit, I'm really excited about this topic. As a kid I loved cowboy movies, cap guns, and the wild west all together!  My brother also shared in my love of cowboys and we had hours of fun watching our favorite westerns and playing Cowboys and Indians!

There are literally dozens of movies I could have chosen to spotlight here but I ultimately chose the one that sparked my love affair with westerns....Hang Em High. 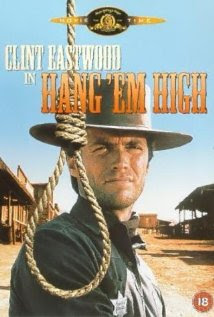 This movie, like many awesome westerns, stars Clint Eastwood. The basic plot is one of revenge. Eastwood's character (Jed Cooper) is wrongfully hung at the start of the movie by a band of would be justice doers.  Cooper survives the hanging and goes on to become a Sheriff himself. First order of business: track down and bring to justice those who wronged him....dead or alive!

Everything about this movie from the music to the actors themselves is simply awesome! Here's a short clip of one of my favorite scenes (SPOILER ALERT):
Like I said in my Spies league post I always go with whatever pops in my head when I first see the assignment.  Well Hang Em High was #1..... Red Dead Redemption was #2. 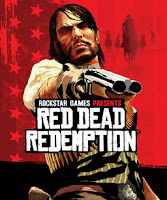 I guess the theme of this post could have simply been "Revenge", because once again that is the goal of the protagonist from this amazing video game!

Red Dead Redemption was made by the same people who bring us Grand Theft Auto. I personally can't stand those games. I find them to be stale and boring. Red Dead however was epic and incredible! The game once again begins with a man on a mission. John Marston (the good guy) is a bandit who had a change of heart and is working for the Feds to bring down his old gang. 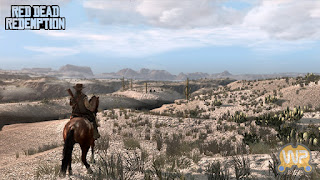 The game has an open world/sandbox layout that is, in one word, incredible. The effort they put into every tree, rock, cliff. and trail is border line insane (but very appreciated). It makes for an engrossing experience as you gallop from place to place on some of the most life like horses I've seen in any video game. 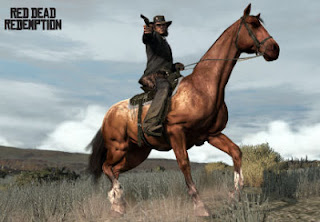 As you play through the game you'll engage in such things as busting gang hideouts, saving people out in the bush from bandits, hunting, and story and side missions which take you to big cities (Blackwater), Saloon towns (Armadillo), deep forests, and even Mexico! 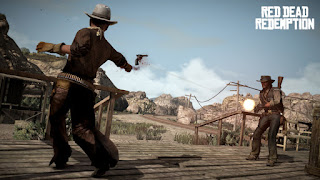 One of many duels you'll encounter! 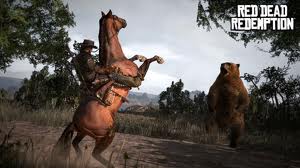 Confronting a grizzly bear deep in the Tall Trees region of the map. 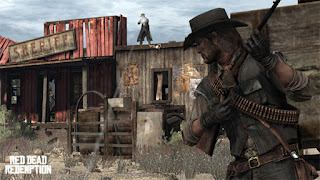 A shootout in Armadillo
I really can't say enough about this game. It's awesome in every way! It even has a free roam multiplayer with the ability to "Posse up" and decimate the other players in the world. If you have an Xbox or PS3 and have not played this game...get it! Annnnnnnnnnnnnnnnnnnnnnnd......if by some chance your still not convinced..., there is even a downloadable add on to the game which gives you a whole new unique story where the undead have risen to take back the west! 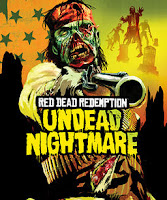 So that's it! As you can probably tell I absolutely loved this League topic!

For more shootouts, hog tying, lasso throwing, gun slinging, whiskey pounding, horse riding, spur wearing, trail blazing fun....check out these posts from the rest of the League!
Monster Cafe is featuring iconic Cowboy related goodies!
Good Will Hunting for Geeks is showing off loads of Cowboy related pop culture!
Branded in the 80s is spotlighting some truly awesome vintage action figures!
Shezcrafti is taking us WAY back with her spotlight, and shaking loose some memories while she's at it!

For all the rest, check out the League's Hub of Operations here