So it's League time again and I must say this is a pretty neat topic! I'm gonna dive right in and get going on this one!

So for starters, I love Netflix! It's cheap, easy to access, and has loads of great stuff! Recently I finished off a nice binge of "Hollywood Treasure"
This show follows a group of high end auctioneers as they "scour the globe to uncover Hollywood treasure". I'm pretty surprised it was cancelled as the show is pretty darn cool. They deal with some of Hollywood's most iconic props, costumes, and collectibles and auction them (in most cases) for astronomical prices! The auction house is called "Profiles in History" and will be auctioning off Han Solo's blaster on the 21st of this month! 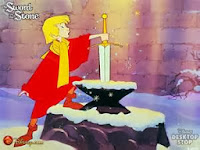 In addition to this I'm currently rewatching "Breaking Bad" with my wife who has never seen it. It is just as good the second time through and I love denying her any information at those moments where you're just like "what?!?!"

The other night I was also super psyched to see they added Disney's classic "The Sword in the Stone". This was a childhood favorite and it still holds up today! Aside from what I mentioned, I love how Netflix offers suggestions based on what you've previously watched. It's a great service and for $7.99 a month you can't really beat it!

I'm gonna go ahead and jump to YouTube. I love you-tube for a ton of reasons. It's got loads of stuff that I enjoy watching from scientific channels to toys and more! I want to go ahead and mention a few of my favorite channels. First up is "Vsause's" more recent upload. They literally blow my mind fairly regularly with their videos. Super interesting and always informative! This one is all about illusions and is well worth watching!

Next up are two movie based channels that make fun of our favorite films. The first being CinemaSins and the other, Screen Junkies. Cinema Sins basically disects our favorite flicks and highlights all the stuff that makes no sense or is otherwise ridiculous in a very funny and entertaining fashion! Screen Junkies, on the other hand, has a series of videos called "Honest Trailers" where they do a similar thing by recreating trailers with the steroetypical movie trailer voice guy. No movie is spared, even some of the best! I linked a personal favorite of mine where they absolutely destroy Will and Jaden Smith's disaster "After Earth".


And finally I'm going to throw in a shameless plug for my own YouTube channel. I created it nearly a year ago (December 18,2012) and use it to showcase my collection. I've recently cracked 300 subscribers and am really enjoying it. For me it's another outlet to expand my hobby, network, and have some fun. I've met some great people and have plans for expanding my content as I approach my one year anniversary. I have roughly 160 videos so check it out if you're curious. Love to hear your thoughts!

More to come as they are posted.